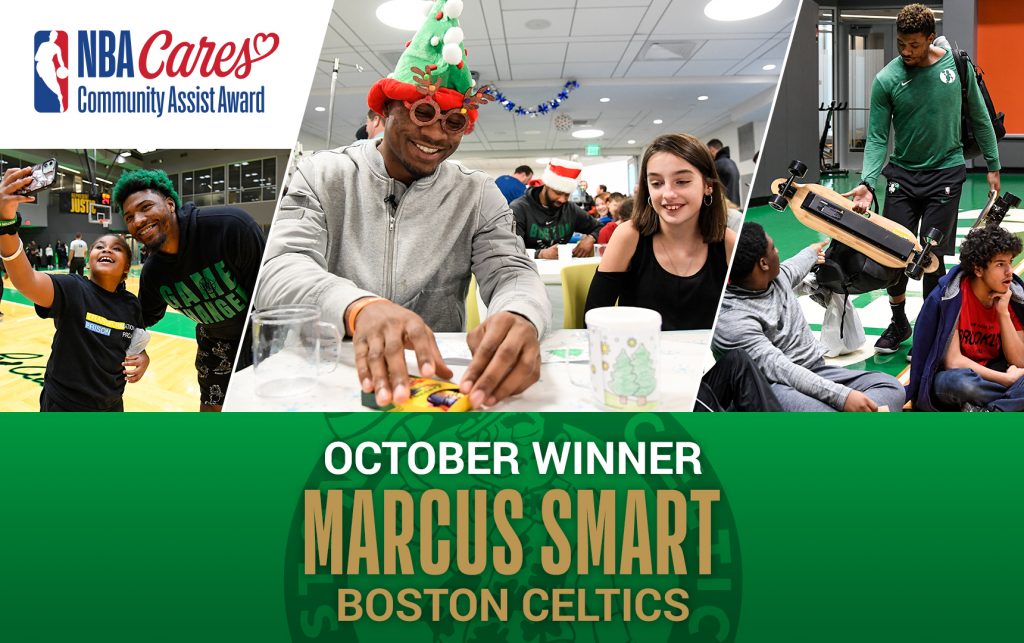 -NBA to donate $10,000 to the YounGameChanger Foundation –

NEW YORK, November 28, 2022 – The NBA today announced Boston Celtics guard Marcus Smart as the NBA Cares Community Assist Award winner for the month of October in recognition of his ongoing support for pediatric cancer patients and commitment to creating access to opportunity for inner-city student-athletes.  Each month of the regular season the award recognizes a player who best demonstrates the passion that the league and NBA players share for giving back to their communities.

Since joining the Boston Celtics in 2014, Smart has made it a priority to visit the Boston Children’s Hospital to spend one-on-one time with kids undergoing cancer treatments.  As part of this effort, he also works to donate mobile charging stations loaded with tablets and video game consoles called “Smart Carts” designed to serve as entertainment hubs, as well as portals for communication and diversion during patients’ treatment and recovery.  Over the past year and a half, Smart and his foundation, the YounGameChanger  Foundation, have made “Smart Carts” available in seven different children’s hospitals throughout New England, one in his hometown of Dallas, TX, and two in collaboration with the JLH Social Impact Fund founded by Jrue (Milwaukee Bucks) and Lauren Holiday to support virtual programming at Children’s Wisconsin Hospital.

Smart primarily engages with his community through the YounGameChanger Foundation, a 501c3 he founded in 2014 to serve as a source of guidance, motivation, encouragement and empowerment for inner-city student-athletes to become game changers both on and off the court or field.  The organization creates opportunities through education, sports and mentorship with emphasis on science, technology, engineering, art and math (STEAM) and also seeks to provide inspiration and life-changing experiences for pediatric cancer patients and their families.  Earlier this month on Nov. 10, Smart hosted his biggest fundraiser of the year, the Bowling Bash, to help further support his foundation’s donation of “Smart Carts” and laptops to children’s hospitals and communities in need.

“I started my YounGameChangers Foundation to serve as a source of guidance, motivation and empowerment for youth to be game changers on and off the court,” said Marcus Smart.  “You never know what people are going through, so giving back to make their lives better in any way and letting them know they are not alone is important to me.  I am honored to receive this award and will continue prioritizing serving my community.”

Smart will be recognized during an on-court ceremony before the Celtics’ home game against the Charlotte Hornets on Nov. 28 at 7:30 p.m. ET.  Steve Pagliuca, Boston Celtics co-owner and president of the Boston Celtics Shamrock Foundation, will present him with the award.  The NBA will donate $10,000 to the YounGameChanger Foundation.